skip to main | skip to sidebar

A woman surnamed Zhang from Jinhua in east China's Zhejiang province told the paper [The People's Daily] that she was stunned when her hairdresser said that all the hair cut off from customers is purchased to make protein-rich soy sauce. "Making soy sauce? I was scared!" Zhang said.

A barber surnamed Liu said, "We did hear the rumor but I have never seen anyone use hair to make soy sauce." He added however that the myth goes further. "I even heard that it can be used to make medicine," Liu said.

"Some people come to buy discarded hair from our shop. Some hair that is complete and long is used to make wigs. As for the smaller pieces, I have no idea what it could be used for." He said the price of hair differs depending on its quality, but most of the hair purchased from his shop costs about 10 yuan (US$1.65) a kilo.

A food safety expert surnamed Shi told the paper that is indeed true that hair can be fermented to make soy sauce. However, Shi said this is prohibited as hair can contain excessive amounts of heavy metals. "This existed years ago but is rare now. Some small factories still do it illegally," Shi added.

A Romanian Couple Have a Shopping Trip Adventure in Bucharest


Signs of the crumbling economy were all around. [...] His eye caught sight of a straw man dressed in old jeans, a T-shirt and a checked jacket propped against the wall of the Church. The figure looked like a scarecrow, he said. Someone had sketched eyes, nose and a mouth on his cardboard face. And as a final touch, had drawn a tear in blue ink, trickling from one eye. On his lap was a sign, ‘No job. Wife and kids to feed.’ Apparently, there were a few coins in a collection bowl beside the straw figure on the pavement! [...]

After paying for the metro ticket, another item on the government’s list for price increases, they waited for the train. With the sound of wind rushing through the dark tunnel and headlights shining on the tiled wall, the train arrived. However, as they got on, they saw a straw figure seated in the carriage. It was dressed much like the first one and also had a face made of cardboard. The sign around its neck said: ‘Tax hikes! Give generously.’ There was a cap on the straw figure’s lap, empty.

“Do you think there are others?” Maria said.

I can just imagine Mitică shrugging and looking around, curiously.

Sure enough, just as the escalator reached street level at Unirii, there was another straw man propped against the window of Unirii Shopping Center, he said. Hung around his neck was a notice,’Petrol price hike! I’m broke’ In fact, as they looked around, they saw more and more straw figures with signs like, ‘Can’t afford medicines,’ and ‘Loan sharks to repay. Deep in debt.’ Not only that, they noticed large flags on roof tops as far as the eye could see. The flags were red with a large, yellow star in the top left hand corner, and four smaller stars in a semi-circle around it.

“Whose flag is that?” asked Mitică, puzzled. “They’re everywhere. Look!”

“Didn’t you see ‘Enter the Dragon’ with Bruce Lee and Jackie Chan?” said Maria, in a superior tone.
“What’s that got to do with the flags?” countered Mitică.

They went into the big store at Unirii Shopping Center and found a shop selling expensive bags. One bag, he said, was made of crocodile skin and cost a fortune. It was on display, high up on a glass shelf. Mitică said he was praying that Maria wouldn’t see it. But, of course, she headed straight towards it like a guided shopping missile, pointing.

The assistant stood on a chair and took the bag. It seemed strangely heavy, because she struggled to hold on to it as she got down from the chair. She handed it to Maria, who clearly loved it. Mitică said he was getting ready to fork out an obscene amount of cash when Maria opened the bag’s silver clasp to look inside. And that’s when something unbelievable happened.

As she opened the bag, the mummified fingers of a hand and then a fore-arm appeared. Maria shrieked and dropped the bag. The fore-arm rolled onto the shop floor. Mitică said that as God is his witness, it was a man’s fore-arm, still with pieces of ripped and bloodied shirt sticking to it. The assistant fainted. Then the manager appeared. Mitică said that the manager was desperate to prevent a scandal and urged them to take the bag for nothing. However, he made them solemnly promise they would never mention the incident to anyone.

They left the shop in a hurry, and as Mitică glanced back, he saw the manager dragging the unconscious assistant to a chair while calling for a glass of water. The fore-arm still lay on the floor. [...]

JOHOR BARU: An abandoned mansion in  Jalan Skudai, here, in Danga Bay [Malaysia], has become  the centre of attention, following rumours that a 16-year-old youth  is being "hidden" there by "evil entities".

Shamans and bomoh have stationed themselves outside the Villa Nabila mansion, reciting prayers and offerings, hoping to persuade the "entities" to release the boy.

Some 300 people gathered outside the mansion yesterday, hoping that Mohamad Izzat Izzudin Hussin, who disappeared from his home in Kampung Majidee here on Saturday, would be found. Prior to his disappearance, he reportedly told friends that he was going to Villa Nabila.

The pre-war double-storey mansion with a sprawling compound had, over the years, gained ill repute, with rumours of murders and massacres having taken place on its grounds.

The rumours ranged from that of a young maiden named Nabila, who was murdered and sealed in the mansion's walls by her stepmother, to the murder of a family of five by their gardener, a black magic practitioner. As a result, the mansion attracts occult hunters and thrill seekers.

Among the superstitions surrounding the place are that visitors should enter the house in even numbers. Should they visit in odd numbers, there will be an "extra" person in the group when they leave.


Source: AsiaOne, 19 November 2013, which also has a slideshow of photographs of the haunted house in question, including this tantallising shot: 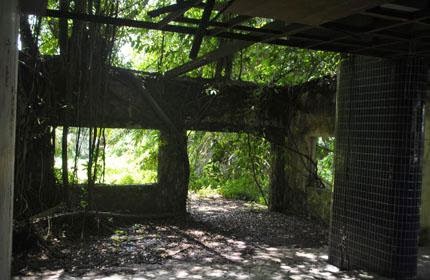 The news of a man who transformed into a python and swallowed a girl in his hotel room in Molyko, Buea, spread like wildfire Saturday morning leaving curious citizens with no option than to rush to the said hotel (name withheld) to see for themselves the monster and its victim. The crowd that streamed in disrupted traffic between Mile 17 Motor Park and Molyko as they wanted to forcefully get into the hotel and get the python killed.

The situation degenerated transforming the Mile 17-UB Junction stretch of the main boulevard in Molyko, Buea on Saturday November 9, into a Hollywood film scene or better still, a reminiscence of strike scenario in the University of Buea as an angry mob of students and other curious denizens were being prevented by security operatives from forcing themselves into the hotel premises to see the python that is alleged to have mysteriously swallowed a girl. The situation resulted into an open confrontation between security forces and the crowd that threw stones on the forces leading to untold destruction of the hotel’s panes and cars parked in the hotel premises.

The security forces of the Buea Mobile Intervention Unit, 2nd District Police post in Molyko and the Gendarmerie squadron fired tear gas to disperse the crowd and restore calm and traffic flow on the stretch. The chaos left some persons with injuries including a Police officer of the GMI Buea who sustained a head injury from a stone. By press time, some four demonstrators were arrested by security forces. The Divisional Officer of Buea, Paul Wakam Kouam, the deputy State Counsel of Buea, Magistrate John Njonjo, the first Deputy Mayor of Buea, Emmanuel Motomby Mbome, all came to the scene to restore order.

The DO advised the crowd to retire to their homes assuring them that nothing strange has been discovered in the hotel following an inspection of the rooms. Earlier, the Manager of the Hotel simply described the incident as rumour circulated by his competitors. One of the hotel staff said the presence of a senior Police official at the hotel who was accompanied by regional police officials for breakfast that Saturday morning must have triggered the widespread rumours.


Source: Cameroon Tribune, 10 November 2013
A separate report the following day on RTV Nouvelles adds the detail that the man transformed himself into a snake after having sex with the woman.
Posted by Merl Fluin at 17:09

Flies can be repelled by hanging up a plastic bag that is full of water and contains a US one-cent coin.

The efficacy of this has been reported in both the US and the Middle East (where it is used by US Marines).

News spread on social networks in Saudi Arabia this week that a giant mouse nearly one metre long had killed two babies in the Gulf kingdom. [...]

Newspapers said the news were carried on Facebook and other social networks in the Gulf kingdom that the giant mouse has four large teeth with a length of around 2.5 cm each. “The news said the mouse killed two babies,” Almadina daily said.

A singular story of a poisoned ring appeared in the French newspapers a few years ago, to the effect that a gentleman who had purchased some objects of art at a shop in the Rue St. Honoré, was examining an ancient ring, when he gave himself a slight scratch in the hand with a sharp part of it. He continued talking to the dealer a short time, when he suddenly felt an indescribable sensation over his whole body, which appeared to paralyse his faculties, and he became so seriously ill that it was found necessary to send for a medical man. The doctor immediately discovered every symptom of poisoning by some mineral substance. He applied strong antidotes, and in a short time the gentleman was in a measure recovered. The ring in question having been examined by the medical man, who had long resided in Venice, was found to be what was formerly called a ‘death’ ring, in use by Italians when acts of poisoning were frequent about the middle of the seventeenth century. Attached to it inside were two claws of a lion made of the sharpest steel, and having clefts in them filled with a violent poison. In a crowded assembly, or in a ball, the wearer of this fatal ring, wishing to exercise revenge on any person, would take their hand, and when pressing in the sharp claw, would be sure to inflict a slight scratch on the skin. This was enough, for on the following morning the victim would be sure to be found dead. Notwithstanding the many years since which the poison in this ring had been placed there, it retained its strength sufficiently to cause great inconvenience to the gentleman as stated.

The Bureau of Surrealist Ethnology

The Bureau of Surrealist Ethnology was founded in July 2007 in Devon, UK. Our investigations encompass myth, legends, calendar customs and the ritual year, murder ballads, jokes and proverbs, dancing, graffiti, and all other outbreaks of the Marvellous in vernacular culture. This collectanea project brings together a wide range of data, from various sources, which all have one thing in common: poetry. These data in turn form the basis of our more theoretical elaborations and investigations.